In 1984 I married again. Between my wife and me we had three children, and we pooled our savings, and used her part of the income from the sale of her home to buy a 4-bedroom home in Villanova. The purchase was a stretch since I had been out of work from October into December of 1983 from a twisted bowel that burst and two operations to fix it and clean my up from the peritonitis I developed from the complications.

During the '80s I improved my carpentry and landscaping skills to take care of the 1-1/4 acre property, build a patio, redo bathrooms and a kitchen, and construct a work room connected to the house to use for my projects.

Through this time, I also improved my client base at work, and began to think that I might actually be a viable Advertising & Design firm. In 1987, my wife and I purchased an office condominium to house my business. Through this time, though "art" was always being done in conjunction with job, my own personal period of artistry seemed to draw to a close. I accepted and enjoyed the fortunes, tasks and  responsibilities of being father, husband, businessman, handyman and landscaper.

Then in 1988, a project at work came along that called for a "painting" to be part of it.  It was a joint project conceived by the directors of the Delaware County and Chester County Tourist Bureaus - Pat Lassiter and Pat Redmond. Their thoughts were of a photographic poster that would combine the "attractions" of both areas and the counties' nearness to the City of Philadelphia.

After thinking about the complexities of a montage and the confusion of so much in one poster, I suggested a painting in the style "Grant Wood" that would display the "attractions" on a rural landscape with Center City and its single new "tower" and City Hall in the distance.

"Who would you have do this?" Pat Lassiter asked. I immediately answered, "I would!"

"You do this sort of thing?," she responded.

Pat Redmond, who's son Jon Redmond had recently graduated from the Philadelphia Academy of the Fine Arts and was on to a career of great promise, was most encouraging. "Show us a sketch of what you have in mind, and we'll go from there."

I struggled through the "sketches" knowing that the drawings I created had little to do with the tone I wanted to achieve, while I also built a canvas and painted a small portion of my idea in place on it.

The sketch and the sample sold the job, and with a few alterations I was on my way to create my first "commissioned" painting for a "real" client. 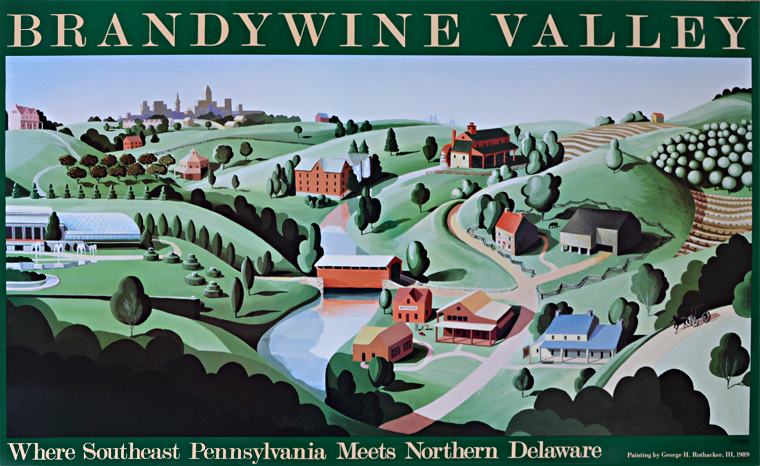 Since the painting was in keeping with my work as an "illustrator," I accepted that it was derivative of Grant Wood's style. Though I got to include most of what I thought should be contained within the painting, my job was to blend Chester and Delaware Counties to  produce a poster. I approached it like a "job," and even had my assistant artist fill in parts of the painting for me when he wasn't busy and I was.  I also left the design of the border and the type to my art director. But all in all, I felt good about having my name associated with a piece of artwork that would be displayed in offices and have my name on it.

The process showed me that I might be able to achieve some artistic goals of which I had left behind. I was proud of the work and appreciated the praise I received when the poster was completed. And I knew that I would at a point in the not so distant future reassert myself and paint again.