From 1972 until 1977 I was employed by A.J. Wood Marketing Services. During that time I was promoted from graphic designer to the Creative Director of the Communications Department. The firm was located at 12th and Locust Streets in Philadelphia, and I was fortunate enough to be able to watch the parade from my office when the Flyers won the Stanley Cup. The owner of the company had become an art enthusiast during my stay with the firm, and I was given the freedom to provide designs for projects that I would never have been permitted to submit in other businesses. 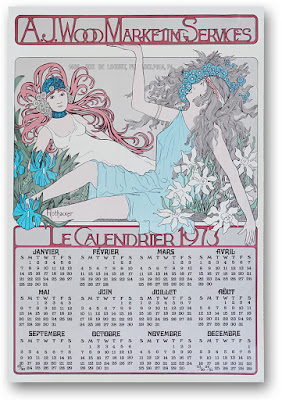 If I saw a style of work I liked, I created a brochure in that style....whether it was appropriate or not. The '70s were a time of freedom in the office place, and no one took more license than I in using to advantage my being the artist in the firm.

Shortly after arriving at Wood, my boss suggested that we do a calendar for 1973. Of course, I was enthusiastic about the assignment, and responded with an idea that we create a poster calendar reminiscent of the European artists of the late 19th century. Why? Because I had become a fan of  Alphonse Mucha, a Czech Art Nouveau painter and poster designer. The surprising thing was that nobody said, "No!"

Since I wanted the calendar artwork to be complete of itself, I violated most rules of design etiquette and created the whole calendar on one board, I even added the lettering in transfer type directly to the calendar art. Using amberlith, a lacquer-based film, I cut the color overlays necessary for the three-color printing process. Everyone seemed pleased with the results, and many clients requested duplicates for friends and family.

The next year, my boss and the owner of the firm thought the company might be able to sell a more generic calendar for 1974 to other businesses. Since we all seemed to enjoy the trick of making a French calendar for 1973, we came up the idea of doing a medieval style "Chaucer" calendar with the date 1387 (the months and days matched the calendar dates of 1974. I know that my fascination with Aubrey Beardsley's art had an influence onthe style, as well as my appreciation of the art of  Nancy Burkert, an award winning children's book illustrator who had  recently published a version of Snow White.

Though the calendar never sold, it was mildly successful, and I went on to design three more calendars for Wood. In 1975 I used the 1930s as my theme (since 1930 and 1975 had the same calendar dates), and used an art deco look. The actress Joan Crawford is featured in the center paralleled by a depression era Walker Evans photo and a dancing couple. Another Walker Evans dust belt photo is in the top left balanced by an illustration of Marlene Dietrich. The next year, 1976, was to be country's bicentennial, and the calendar  featured the many faces of Ben Franklin and his inventions. For 1977 I painted an old radio and decorated it with the history of Communication over the decades or centuries.

By 1976, I had become the Creative Director of this very conservative firm, and using my free reign I had created Donald Duck and Uncle Scrooge characters for a banking trade shows, a comic book telling the story of banking research using the images of people in the firm, a Christmas card set in a Victorian living room that lampooned the owner and his sons and included portraits of little known people in the Wood Communications Department as well as my ex wife and my dog. My designer and I even created a "Build With Wood" brochure using a cover of a jigsawed puzzle of wood blocks that on the inside pages were assembled into buildings. Soon after that I began work on my greatest work for Wood, a 1978 calendar featuring a surrealistic dystopian landscape fronted by wood block and an arch carved with the letters "Build with Wood." Wooden pillars on each side of the arch were flanked by an image of my copywriter in bluejeans, and the head of computer services on the other with a magnetic computer tape in hand.

When asked by my immediate boss, the owner's son, what I was doing for the calendar, I proudly showed him my progress with a complicated explanation supporting my theme. Unfortunately he was not pleased with my effort, and wanted to know how quickly I could come up with another idea. I responded by turning in my resignation. Much to my boss' dismay, his son accepted it gladly, and I was on my own.

There isn't much to comment on from my perspective today with regard to my tenure at Wood, or my response to the negative reaction towards my calendar.  I can only smile at having gotten away with so much for so long – from super hero standup figures launched on the elevators and sent to every floor of the building, to pot being smoked in the office, and a Christmas party presentation where I made totally inappropriate remarks about the owner, his salesmen and his sons. I had been given a license to learn, grow and express my wildest ideas, complete enormous personal drawings on company time (and have them printed and used as giveaways), and  create weird and implausible marketing campaigns without reproach.

Who gets that chance?

After leaving Wood, I found employment as an art director at an advertising firm where I picked up many pointers and techniques of the trade. I lasted 6 months and quit.