After painting Radnor and the surrounds of the Township, I made a left turn that puzzled my wife and my patron. I was tired of painting houses, and didn't want to be known as a house painter.

I was invited into the Pennsylvania Trust Company's conference room to discuss the possibilities of another Radnor show, when I spontaneously announced that my next show was going to be paintings of cars.

"Why?" was the response.

"Because I've always loved cars and think that painting them in all forms will be both salable and fun."

"But you are becoming known for your work in Radnor?"

"I understand, but I don't think that by repeating what I did, I will do as well as with painting something else!"

And, so, a year and a half later, in October 2006, I held an exhibit of 36 paintings of cars, trucks and a a motorcycle at Newman & Saunders Galleries in Wayne, to benefit, yet again, the Radnor High School Scholarship Fund.

This must have been the most fun I have ever had with a painting project. I met found new friends, experienced an inside look at museums I had never entered, and got invited by the Radnor Concours d'Elegance to exhibit my work at their automobile event prior to my show. They also invited me to become a Board Chair.

I truly enjoyed painting all manner of vehicle throughout this period. I painted two Alfas and a D Jaguar in the storage space rented by Fred Simeone (before he built his museum). I painted a rusty truck in the rain, a '41 Moto Guzzi motorcycle in a field of yellow flowers,  a '57 Chevy Nomad station wagon partially covered in snow, and a LaSalle in Broomall after a blizzard with snow carved away from the grille with a snow blower. 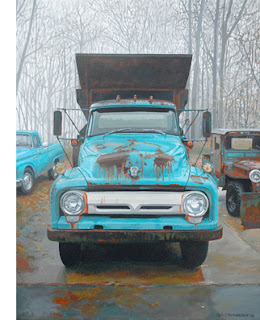 This wasn't about finding paintings I could sell, but about meeting people and painting cars in unusual places and settings. In selling the paintings, I found that people mostly bought paintings of cars they owned, though they were really interested in barn cars and the unusual settings. I also discovered that people who own cars spend money on "cars" not on "paintings of cars."

As a marketing person, I was able to add extra pizzazz to the show by inviting the people who owned the cars that I painted, to bring their car to the exhibition. We even had a dragster start up in the street outside the gallery.

What I also learned is that you can rarely predict the public. People who loved "art" loved certain cars and scenes, but people that loved "cars" just loved the car and weren't as particular about the painting or its style. The red Moto Guzzi remains in our kitchen. The bright green landscape dotted by yellow flowers with the red motorcycle is a favorite of Barbara's and is also in colors that go with our kitchen decor.

Click to Chapter 14: Commitment – The Seasons of Eastern University